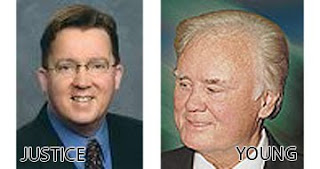 For those looking to the latest fundraising reports for clues as to whether Congressman Bill Young will retire or not, keep looking. According to the Year-End reports filed with the Federal Election Commission, the soon-to-be octogenarian raised just $750 during the last period which covers contributions received between October 1 and December 31. Meanwhile, Young’s so-called re-election campaign spent more than $22,000, including almost $800 a month on a “campaign vehicle.” Of course, Young has $395,879 in cash-on-hand from money he rolled over from previous campaigns, so maybe Young doesn’t have to rush headlong into collecting checks.

Still, based on those numbers, it’s difficult to know whether Young will run again or retire. After all, it’s pretty hard to take seriously a campaign that raises only $750.

Then again, Young’s challenger, state Senator Charlie Justice isn’t setting the campaign trail on fire, at least as far as fundraising goes. After enduring criticism for his paltry fundraising, Justice has posted another troubling financial report for the last quarter.

To date, Justice has $90,918 left on hand – nowhere near the amount he will need to successfully challenge Young. Update – 7:53 a.m. – Politico, reporting on the latest fundraising numbers, labels Justice a “recruiting dud.”

So what should be made of Young vs. Justice? Young doesn’t take Justice seriously, yet the Congressman does little to discredit rumors of his retirement, thereby reinforcing the primary reason for Justice’s insurgent bid.

I’m beginning to get the feeling we won’t know who’s really on the ballot for Congressional District 10 until the filing deadline on April 30.

Editor’s Note: You have to read Darryl Paulson’s guest column in today’s Tampa Tribune in which he eats a lot of crow and changes his prediction to Young running again. Actually, Paulson’s column is really an example of someone out-of-the-loop hearing the wrong rumor third-hand, repeating the rumor and then having to walk something back.

Talk about retirement rumors. Young will be 80 shortly after election day, and after 20 terms in Congress he may be ready to hang them up. Young raised just $1K — not a typo — over the last 3 months. His rival, state Sen. Charlie Justice (D), has $90K in the bank. Both will need to raise more to advertise in the pricey Tampa market.

To usher in the final weeks of the St. Petersburg mayoral race, incumbent Rick Kriseman is

Two weeks ago, state Rep. Janet Cruz was part of a group of Democrats angry at Florida

To usher in the final weeks of the St. Petersburg