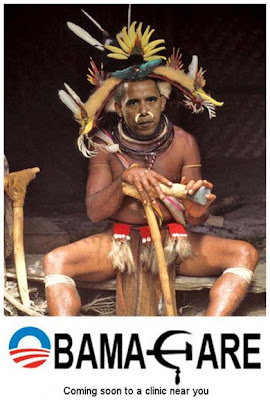 7:18 p.m. – McKalip says he is taking a leave of absence from a leadership role with the American Medical Association. “That e-mail depicted such an offense image, and it was completely inappropriate for me to thoughtlessly forward it out,” McKalip said. “A person in my position, who’s trying to help patients and trying to do it in organized medicine, needs to think hard about the people he’s going to hurt when he sends out images like that.”

4:11 p.m. – Top anti-reform group working closely with McKalip, who sent a message to several online discussion groups attacking what he saw as “race baiting by Obama camp” and accusing TPM of “painting me as a racist.” In addition to the Tea Party group to which he had sent the original image, that second message also went to an address for a discussion group run by Conservatives for Patients Rights, the prominent anti-reform group founded and bankrolled by multimillionaire former hospital CEO Rick Scott, and spotlighted in May by the Washington Post.

2:53 p.m. – Tea Party Leader To McKalip: “We All Have Your Back My Friend!” The national coordinator of the American Tea Party movement is standing behind David McKalip and has pledged her help as he struggles with the fallout over the racist email he sent showing President Obama dressed as a witch doctor.

2:06 p.m. – Dr. David McKalip has told fellow conservative activists that thanks to the flap over his racist email showing President Obama as a witch doctor, he will no longer appear publicly in opposition to health-care reform.

1:35 p.m. Marco Rubio won’t say whether he will sever ties with McKalip. McKalip hosted a fundraiser for Rubio in June: 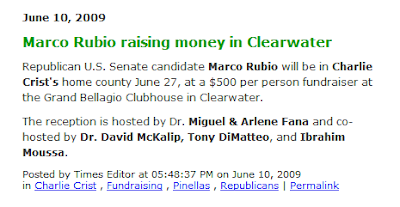 1:08 p.m. – Someone just sent me this picture of McKalip with Angelo Cappelli and Representative Bill Heller: 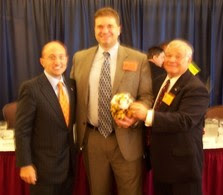 10:20 a.m. – just finding this statement from the American Medical Association on the McKalip situation. Kinda weak, but at least the AMA is putting some distance between it and McKalip.