Menu
The City of St. Petersburg could save as much as $276,509 if it scheduled its municipal elections in conjunction with the county’s, which are held on even-number years. But converting the city’s elections to a mail-ballot system would only save $17,900. These numbers are part of a series of cost estimates prepared by the Supervisor of Elections office as it responds to inquiries from several cities and towns interested in not only saving taxpayer money during difficult financial times, but also in boosting voter turnout.

The estimate of conducting a citywide election in an off-year: 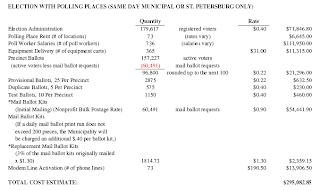 The estimate for a city election in conjunction with the county-wide vote. 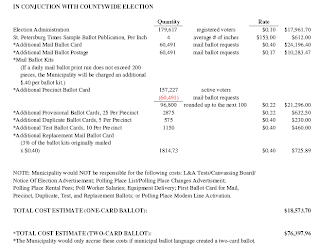 The estimate for an all-mail election:

So which election system is the best? I’ve already stated that I prefer moving the city’s elections to the late Spring. Councilman Herb Polson suggests (while offering a gem of a quote: “The American voter is lazy”) that city elections should be held in conjunction with the state and county elections.

So I asked Deborah Clark what she thought was the best system for the City of St. Petersburg. Her response was perfect:

For elections beginning in 2010, each municipality (elected officials, managers, city clerks) was provided their cost estimates for conducting elections (in conjunction with the county, with other municipalities, as a stand-alone election, and as an all mail ballot election).

In addition, each municipality (elected officials, managers, city clerks) was provided with the perceptions of pros and cons of moving their elections in conjunction with county elections.

PROS of having an election concurrent with a countywide election:
Costs to the municipality are significantly less
Possible overall higher turnout by drawing more attention to the election

CONS of having an election concurrent with a countywide election:
Possible increase in under votes as voters “drop off” as the ballot gets longer
Possible decrease in media and voter attention on municipal races/issues

These are some of the issues municipal elected officials will consider in order to make decisions about when they want to have their elections. This is a local decision, that appropriately would be made by municipal officials based on what they feel is best for their municipalities.