Menu
The Pinellas Supervisor of Elections got its act together — what would Deborah Clark do without John Buckmaster? — and mailed out the ballots to so-called early voters for the St. Petersburg Municipal Elections. The ballots are usually followed by the direct mail of candidates smart enough to track these early voters. But in a race in which 55,000 ballots were mailed to early voters, I cannot see the value in spending almost $30K to sending each prospective voter a mail-piece.

For me, this reversal of strategy presents a twist of irony, because I was one of the very first consultants in Florida to recognize the value of tracking “absentee ballot requesters.” But that was a time when the number of requests was manageable. Today, everyone gets a ballot, so mailing to early voters is actually just mailing to voters, period. Unfortunately, this is how Clark likes to do things and so the system won’t change anytime soon. But I can tell you why it will change when it does.

Putting 60,000 ballots onto the street more than a month ahead of an election offers too much of an opportunity for fraud. I may not like it, but I do have a few criminal genes in my body, passed onto me by my gypsy father. We know what the downside of possessing such genes can lead to, but still, I can recognize the weak point – the blind spot in the security camera’s view, so to speak – in the system faster than others. Anyway, with all of those ballots out there, how soon before some shakedown artist sets up a racket to gather up ballots from early voters, just like what Buddy Dyer was accused of in 2004?

Speaking of fraud, I guess it’s time to look at the direct mail sent to early voters by Bill Foster and Kathleen Ford. Pretty standard fare for both candidates, although I give credit to consultant-free Ford for actually sending out a mailer. 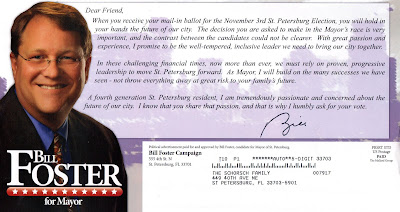 Foster does make a pretty bold claim by asserting that he is the “progressive” candidate in the race. Only when compared to the demagogic Ford can Foster be considered a “progressive,” still I don’t think God intended the word “progressive” to be used by someone who believes that Adam and Eve enjoyed the apple at the same time as T-Rex roamed the earth. 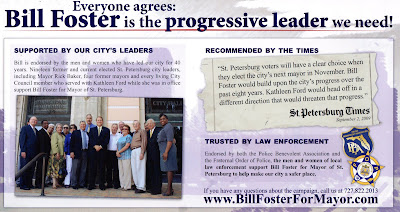 Bill, you are a lot of things — calm, experienced, intelligent, reassuring — but as the man said, I knew Jack Kennedy and you’re no Jack Kennedy.

As for your progressive opponent, I can’t recall a candidate who has done so well, despite the obvious amateur-hour vibe her campaign gives off. In terms of amateurism, Kathleen Ford’s campaign is the New Year’s Eve of Amateur Hour. Meaning, any pro will tell you that New Year’s Eve is the finest hour for collective amateurism — for all the hillbillies that never go out any other day of the year, yet go out on New Year’s Eve to spend their money foolishly on an experience they will barely remember the next day. That’s Kathleen Ford.

Perhaps Mrs. Ford is spending her money on Proactiv, because she is certainly not spending any money on her campaign — and if you haven’t embraced one of the myriad reasons why not to support Kathleen Ford, I urge you to oppose her just for the fact that she has run such an amateurish campaign. A hideous logo, a website that only Stephen Glass could have designed…ugly this, ugly that. And that’s what Ford’s mail-piece to early voters is: ugly, ugly, ugly.

Cheap graphics, garish colors (is that red or did someone spill tomato soup on the printer?) and photos from her campaign kick-off (Hey, this is Kathleen with a black person!) make me wince just writing about this slop. 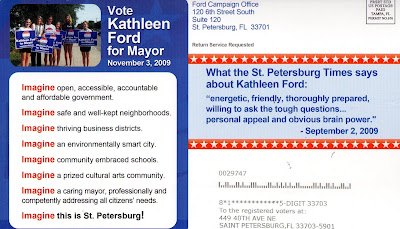 But it’s not the rounded-edge design or seeing Kathleen’s pockmarks that make me turn away, it’s the idea that someone in Ford’s camp actually thought that saying she was endorsed by the Tampa Bay Creative Network means something to voters, most of whom who are so old they think the word “creative” is synonymous with, well, “progressive.” 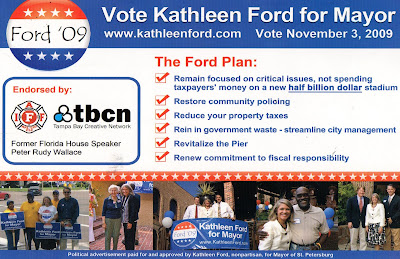 Looking at both of these mail-pieces, I begin to sympathize with Mercutio when he cried out, “A plague o’ both your houses.”