Sen. Jack Latvala is stepping up to help the Republican Party of Florida, and he’s calling on others to follow his lead.

The Clearwater Republican took to Twitter on Wednesday and said he plans to raise $25,000 to the Florida GOP in both the third and fourth quarter, for a total of $50,000 in the final six months of 2017. Latvala, a prolific fundraiser, then challenged others to match it.

The pledge, and subsequent challenge, comes on the heels of dismal second quarter fundraising numbers for the state party.

POLITICO Florida reported that after the numbers were released, some party members took aim at Blaise Ingoglia, the party chairman and a Spring Hill state representative. According to the report, party officials encouraged state committee members not to lash out publicly and instead discuss “things like a family.”

On Wednesday, Latvala, who is mulling a 2018 gubernatorial bid, tweeted that Ingoglia called him to ask for money for the state party. After he read the party raised the lowest amount in decades, Latvala wrote that he decided to do his part. 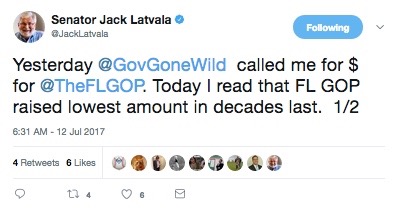 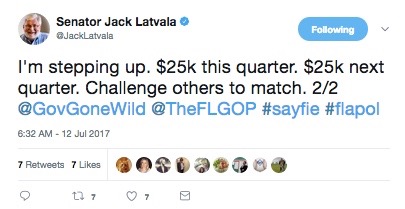 Ed Hooper, in his bid to return to Tallahassee, picked up a major endorsement Wednesday from

Ed Hooper, in his bid to return to Tallahassee, picked