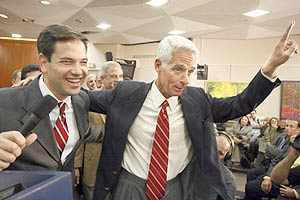 I cannot describe the sheer sense of panic that is pervading throughout Charlie Crist’s supporters here in his hometown of St. Petersburg. At Crist’s beloved Yacht Club or at the bar at Marchand’s in the Vinoy, there are hundreds of Crist’s supporters who cannot begin to conceive of Crist losing an election (as if they forget that the seer-suckered one has already lost twice in his political career).

To his supporters in the ‘burg, Charlie Crist is Tom Brady on the eve of the 2008 Super Bowl. Not just undefeated, but unblemished. The idea of losing to an upstart like Marco Rubio, a one-time lieutenant to Johnnie Byrd, of all people, is inconceivable.

Yet, Crist is on the verge of seeing his campaign spiral out of control. The mainstream media, having waited nearly a decade to really unload on Crist, smells blood in the water. St. Petersburg Times columnists Dan Ruth and Howard Troxler unloaded a double-barreled criticism on Friday:

Dan Ruth: This was supposed to be a cakewalk for a hitherto popular governor. Spend a year or so hanging around Tallahassee, wait for Mel Martinez to start wanting to spend — everybody now: “More time with the family!” — and then waltz into the United States Senate, otherwise known as “American Idols.”

For Gov. Charlie Crist, political life has always been sort of a Willy Loman-meets-George Hamilton existence. The man is a walking hand-shaking, spit-polished, tanning bed machine. It was a simple enough game plan (full column here).

Howard Troxler: Just to be clear, Charlie Crist did not endorse the stimulus, okay? Sure, our governor took the stimulus dough. But it was an accident. He thought it was a campaign contribution. He hugged the president back in February, too. But he didn’t even know he was hugging the president. He was being sociable. (column here).

Those columns came on the heels of stories about Crist’s relationship with Ponzi schemer Scott Rothstein, a complaint being filed with the FEC and Crist’s insistence that he did not support President Obama’s stimulus plan.

And we’re still ten months away from the primary! Before which, Crist will likely suffer through another disastrous legislative session, while enduring the sight of Jeb Bush endorsing Rubio.

That is why the highball crowd at the Yacht Club is panicking. Because there is no way to stop the barbarians at the gate. The barbarians, in this case, being the dyed-in-wool conservatives absolutely disgusted at not just Barack Obama and Nancy Pelosi, but their own Republican Party leaders, most notably Governor Charlie Crist of Florida.

I mean, is any one else getting the feeling that the conservative movement in 2010 will stomach its continued minority status in Congress, so long as Marco Rubio wins the U.S. Senate seat in Florida? As Aaron Blake writes in The Hill, the Rubio-Crist battle represents the No. 1 conundrum for conservatives in 2010.

That is why Crist’s supporters in Marchand’s are panicking. Because the barbarians at the gate are anything but. They are the well-scrubbed, well-organized backbone of the GOP.

Over the last two weeks, I have seen Marco Rubio attract crowds in excess of 200 people at three different events in the Tampa Bay area. At the New Tampa Republican Club, Rubio spoke of ‘American Exceptionalism’ and was greeted with a standing ovation. A week later, Rubio wowed a crowd at Crabby Bill’s, the home turf of former Pinellas GOP chieftain Tony DiMatteo, who once was one of Crist’s most prominent supporters but now backs Rubio. And on Saturday, Rubio spoke to at least 300 people at a meeting of the Pinellas 9/12 Club, where some paid $10 to take a picture next to a cutout of Glenn Beck. 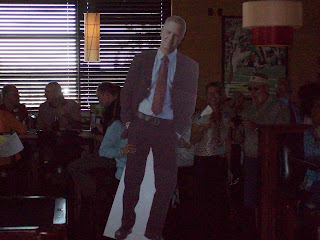 As a former Republican, I saw many of the people I worked with over a decade ago to help elect Jeb Bush, people who fell out of favor with the state GOP. All of them are full-throated in their hatred of Crist and support of Rubio, which makes me wonder, at this point, if there are 200 people anywhere in Pinellas County who would gather in support of Charlie Crist.

Crist is hoping the Pinellas Republican Executive Committee supports him. The straw vote to be conducted of the PCREC is why Marco Rubio has been in Pinellas County so much lately. After racking up a series of lopsided straw ballot wins that would have made the 1985 Oklahoma Sooners blush with envy, Rubio has essentially made the Pinellas vote the first do-or-die moment of the Republican Primary. And never before has the result of a straw ballot vote had these kind of ramifications.

If Crist decisively loses the straw ballot of his home county’s party — a party which four years ago donated $50,000 to his gubernatorial campaign — then he very likely will lose his own party’s nomination. As crazy as this sounds, Tuscon’s restaurant (where the PCREC meets) could be Charlie Crist’s Waterloo.

It is with all of this on the line that Marco Rubio comes to the PCREC this Monday night. He gets to speak before the PCREC this month, while Crist will present his case next month and the straw ballot occurs in early January. For Marco Rubio, this is the most important speech of his political career. Many of the people in the room tomorrow will have heard him speak before, so he cannot rely on his standard stump speech, nor can he say anything that could be considered overtly disrespectful to Charlie Crist because you don’t come to someone’s home and call him a son-of-a-bitch.

Yet, Rubio has to be aggressive in his case against Charlie Crist. He has to persuade a room full of people who have volunteered for Crist for more than a decade. Many of the people tomorrow night will be GOP stalwarts who have manned the phones and walked door-to-door for each of Crist’s campaigns.

Essentially, Marco Rubio has to ask a room full of people who have been married to Charlie Crist since 1992 to divorce him for irreconcilable differences.

If Rubio can persuade a majority of the PCREC to divorce Crist, persuading the rest of Florida’s Republicans to merely stop dating him will be much easier.