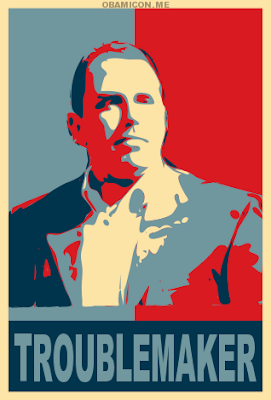 It is with tremendous enthusiasm and the support of my family and friends that today I announce my candidacy for Creative Loafing’s Best of the Bay award “Best Local Troublemaker.”

In so many ways, this is a no-brainer: since I returned from New York last year, no one has created more havoc in the local political scene.

I told Mayor Rick Baker to shave his mustache. I’ve torpedoed more people than Sean Connery. I even called the St. Petersburg Times the C-word and its editor of editorials a “pussy.”

Love me or hate me, and it’s probably the latter, I believe I deserve your vote for Best Local Troublemaker. You can vote now by visiting cltampa.com/botbballot.

Sure, I deserve the Best of the Bay for Best Local Blog. I mean, what other blogger is publishing the goods like I do? Statewide and national stories about Scott Wagman’s illegal Google ads, David McKalip’s photos of Barack Obama as a witchdoctor, Deveron Gibbons’ horrendous driving record, as well as the best coverage of the St. Petersburg mayoral race.

But I don’t slurp enough to win Best Local Blog. There’s no way CL editor David Warner or Wayne Garcia would give the credit this blog deserves by letting it win that award. So why not go after the award that best suits me, Tampa Bay’s best troublemaker. Just look what the local media has written about me recently:

And those are the good quotes! But I’ll be talking more about why I deserve this award — and what I promise to do if I am elected to this important post — as my campaign moves forward. Right now, I am asking for your support and your vote. You can PayPal me a few dollars by via [email protected] More importantly, please visit cltampa.com/botbballot and cast your ballot now.

Thank you for your support and I look forward to seeing you on the campaign trail.