Menu
Trust me, it brings me no pleasure to vote for Bill Foster.

I was critical of Foster when I was working for Jamie Bennett and most of the criticisms have held true. Foster has run a less-than-average campaign, allowing what appears to be a streak of disengagement to permeate throughout his bid for Mayor. For example, he announced he was running for Mayor in February, as if he hadn’t known for months, if not years, that he was going to run. And after he announced, he waited six weeks to deliver his announcement speech. For the better part of this year, Foster, clad in tropical print shirts, meandered, rather than ran, for Mayor.

But this strategy worked for Foster as Deveron Gibbons and Scott Wagman punched themselves out of the race. But now, at the most critical juncture in Bill Foster’s political career, he has yet to display the sense of urgency needed to win the election.

But an election, like dining out, is a choice. Of course I would love to eat foie gras or Toro tuna, but, simply put, that’s not on the menu. I am left to eat rib-eye: always dependable, rarely exciting. It’s better than most dishes, but certainly not what I really want.

So, here you go Bill, my fraternity brother. Here’s one vote for you: 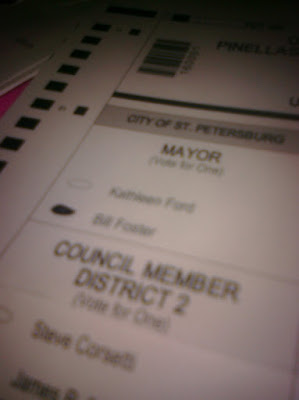