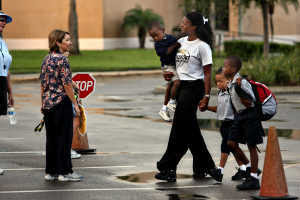 Both pieces are exquisitely written and, after reading them, it’s clear that there are two capable candidates running. But the article about Angela Rouson displays a level of humanity and life experience that Steve Kornell just doesn’t possess yet. Since neither of them have held public office, I think it’s important to closely examine their personal lives and Angela’s story of successfully raising five young men — in this day and age — tells you she can do anything. In fact, after reading this article, you’ll conclude, as I did, that City Council might even be easier…

It’s 6:20 a.m. and Jared Rouson can’t find his socks. His mother, fixing an English muffin and egg breakfast for five boys, tells him to look in the laundry basket.

His socks couldn’t be there, he insists, and like many a 7-year-old, his protestations get louder with each repetition.

What happens next could form an object lesson for City Council meetings of years past, where decibels often smothered deliberation.

Angela Rouson bends down to her son’s level, summons him with a crooked finger and lowers her voice.

“Trust me, and I will explain to you that that’s where I put them,” she says, stretching out her words until he quiets down. “Check it out.”

Tension defused, the Rouson household continues its calm choreography toward a departure to three different schools. Father Darryl has already left for an early flight to Tallahassee, but no matter.

Evan, 16, microwaves bacon for himself and two younger brothers. When he spills orange juice, his mother hands him paper towels without a word.

While prepping Emanuel, 8, on his spelling test, Rouson’s eyes stray to an empty bowl and glass. “Jared, son, I’m still seeing your stuff on the kitchen table. Put it away.”

Parenthood, with its attendant multitasking, is a central theme to Rouson’s campaign for City Council.

“I’m the only candidate raising five children to become productive, accountable and responsible men,” she recently told the Suncoast Tiger Bay Club. “And I acutely understand the peer issues they face.”

Please be sure to read both articles. No matter who you are voting for, you’ll be proud of both candidates.

The decision by St. Petersburg Mayor Rick Kriseman‘s administration to award the Callaloo Group to take

St. Petersburg Mayor Rick Kriseman and members of the City Council had plenty of laudatory praise

The decision by St. Petersburg Mayor Rick Kriseman‘s administration to