Menu
At this point, it does not appear likely Congressman Kendrick Meek will collect the requisite number of voters’ signatures to place his name on the ballot.

Even if Meek does end up collecting the requisite number of signatures, it won’t matter. He has wasted any chance of seizing the momentum from the two GOP candidates who have captured the attention of the nation’s political class.

Rather than investing further in Meek’s fledgling campaign, as Meek’s campaign manager Abe Dyk suggests (or “relaxing” as Steve Shale suggests, it may be time for Democrats to consider re-prioritizing their finite financial and grassroots resources. Six months ago, the top two priorities for Florida Democrats were the Gubernatorial and Senate races. Today, that’s no longer the case. In the wake of Meek’s inability to generate support for his signature-gathering effort, much less his campaign, there should be a new to-do list for Florida Democrats. 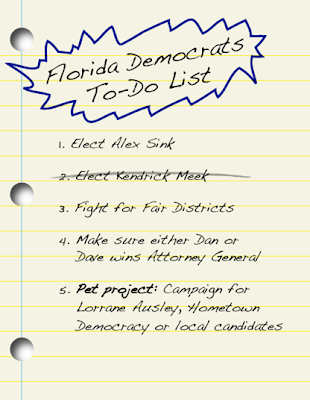 Number 1: Elect Alex Sink – Every top-flight Democrat fundraiser, activist and blogger in Florida and DC needs to forget about winning the Senate seat and start campaigning for Alex Sink. Even if Meek were a viable candidate, the Democratic Senatorial Campaign Committee does not have the money to compete in Florida, especially if incumbents such as Harry Reid are still in trouble. Any dollar that goes to Meek that could go to Sink (or to an organization that could help Sink) is an unwise investment.

Number 2: Fight for Fair Districts – Research indicates that if Florida had “compact, contiguous” legislative districts, Democrats would be in position to pick up at least seven state legislative seats. Lord knows what Democrats could do with more equitable congressional districts. Instead of collecting petitions for Kendrick Meek, Florida Democrats would be better served canvassing for support for Amendments 5 & 6.

Number 3: Elect Dave Aronberg or Dan Gelber the next Attorney General – Dave or Dan. Dan or Dave. Pick one. At this point, I don’t care. Just know this. Adam Putnam will be running for Governor in eight years. Whoever wins the Democratic nomination in September of 2010 very well could be the party’s gubernatorial standard bearer in 2018.

Number 4: Take your pick of your favorite pet issue or candidate and campaign for either Lorrane Ausley or passing Hometown Democracy or a host of local candidates.

Number 5: Worry about Kendrick Meek – I’m not suggesting Florida Democrats forget about Kendrick Meek. What I am saying is he needs to show us something other than advertising on NASCAR. Maybe Charlie Crist will run as an independent and then Meek will really have a shot. But until Meek does something that knocks our socks off, I suggest Florida Democrats write their own new to-do list.

For the second time since the end of the primary election in the race for St.

The Constitution Revision Commission (CRC) on Monday moved forward on

Declaring it is time for Florida to “modernize” it’s voting