Immediate action is needed to combat the spread of Zika.

That’s the message Gov. Rick Scott conveyed in a letter to President Barack Obama on Wednesday. In the letter, Scott called on the Obama administration to immediately provide Florida with Zika preparedness kits, resources to enhance surveillance and abatement, resources to increase training for mosquito control technicians, and resources to increase mosquito laboratory capacity.

“The fact that Congress has not taken immediate action to protect our nation before hurricane season began and we have entered the heart of summer heat, heavy rainfall, and a growing mosquito population, is profoundly disappointing,” said Scott in his letter. “However, in order to best protect the 20 million people in Florida and our many visitors from the spread of Zika, I cannot waste any time on disappointment. Florida needs action from the federal government now.”

Scott pointed to several preparedness items he had requested during a May 12 meeting with Health and Human Services Secretary Sylvia Burwell. He also outlined specific requests made by counties, cities and mosquito districts to help combat the spread.

“Your prompt attention to the items above is even more important now that we know Congress will not authorize any federal funding during their vacation time over the next two weeks,” said Scott in his letter. “Without congressional action, which I requested during my visit to Washington last month in meetings with U.S. House and U.S. Senate leaders, Florida needs your federal agencies to meet our needs quickly.”

According to the Centers for Disease Control, there are 591 cases of travel-related Zika virus in the United States. As of Tuesday, the Florida Department of Health reported there were 160 cases in Florida. Thirty-seven of those cases involved pregnant women, regardless of symptoms.

Florida lawmakers have led the charge to get funding to help battle the spread. Sens. Bill Nelson and Marco Rubio teamed up to sponsor a proposal to fund Obama’s $1.9 billion funding request fully. That proposal was shot down, but the Senate did approve a $1.1 billion spending plan.

The U.S. House, however, passed legislation to provide $622 million to fight the spread. The two sides now need to come together to reach a compromise that can pass both chambers and get Obama’s approval.

In his letter Wednesday, Scott asked the administration to provide a detailed plan by June 15 on how the state can work with the Federal Emergency Management Agency to request “emergency response funds once the Zika virus becomes mosquito-borne in our state and we are in need of resources to respond to an outbreak.”

“There is no doubt that we fall further and further behind fighting the spread of this virus with every day that passes and we are not fully prepared. In Florida, we learned that the best way to protect our people during a hurricane is to have a good game plan before the storm comes,” said Scott. “With the Zika virus, the storm is predicted by the CDC to be just around the corner, and we need federal action now to keep our citizens safe and healthy through what would no doubt be a disaster if this virus becomes mosquito-borne in our state.” 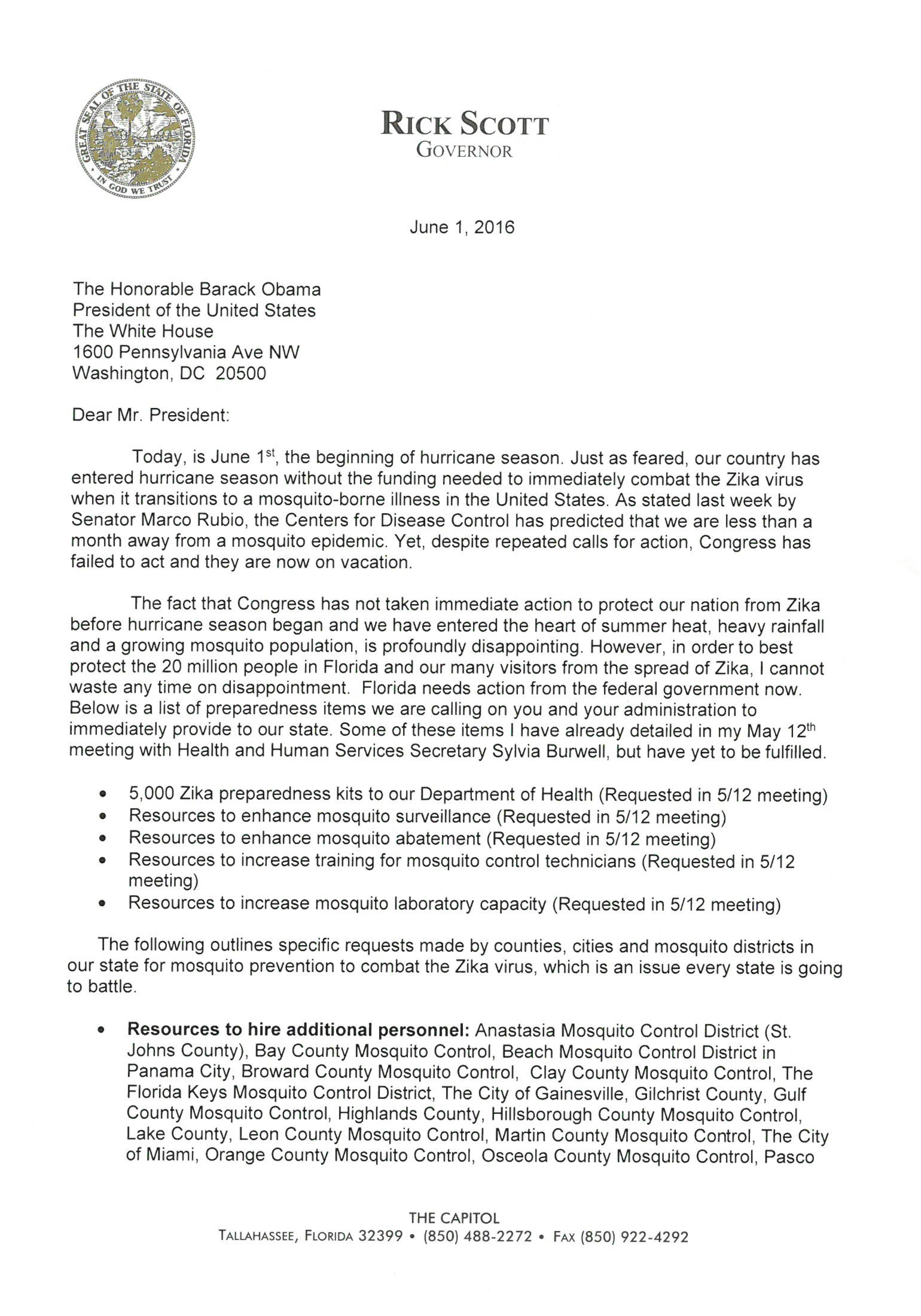 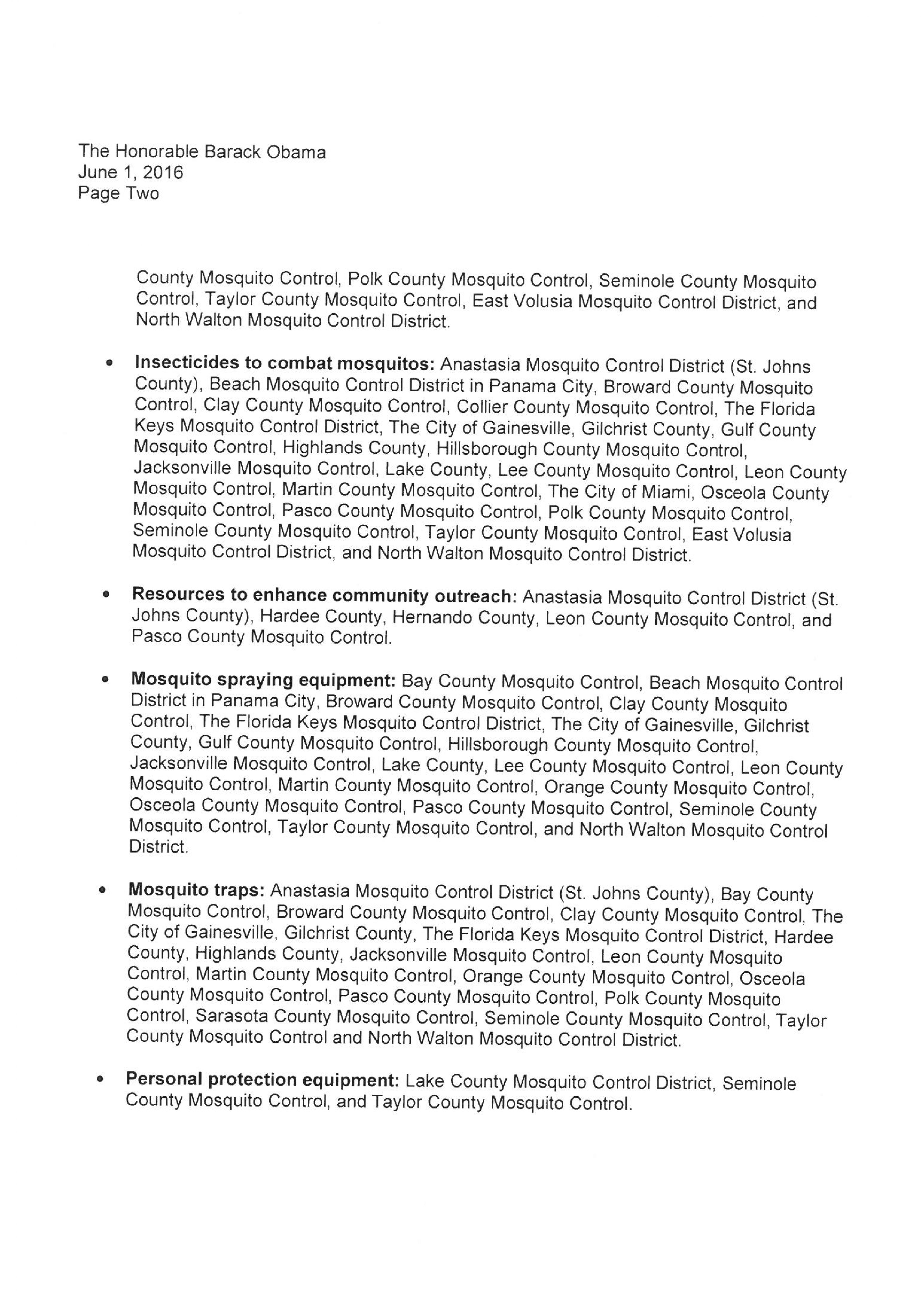 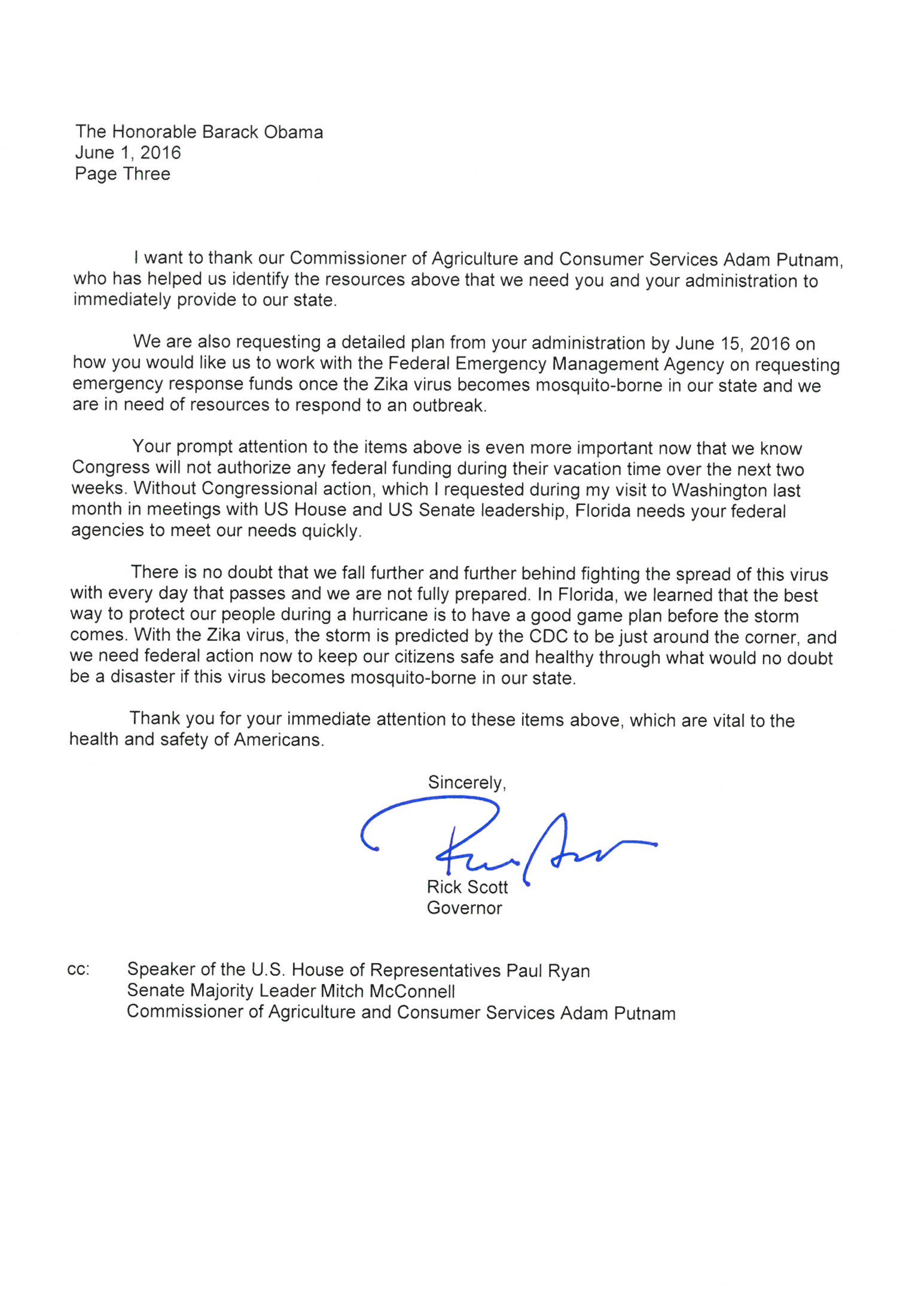