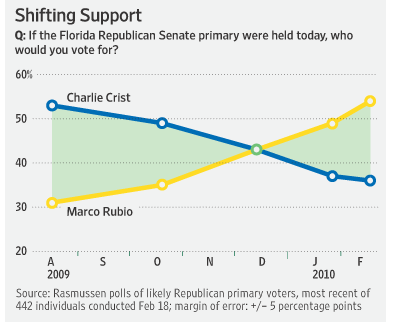 That’s my term for the graph found in this article in the Wall Street Journal: Florida Gov. Charlie Crist suddenly is the underdog in a heated Republican primary race with rival Marco Rubio for a U.S. Senate seat, amid signs the Sunshine State is tilting more to the right.

The shifting fortunes underscore how profoundly President Barack Obama’s slumping popularity is convulsing both parties. The rise of hard-line conservatives and Tea Party activists are eroding support for Democrats and moderate Republicans.

“The conservative movement is the one seemingly with all the energy right now,” said Matthew Corrigan, a political scientist at the University of North Florida. “That really puts moderate Republicans with targets on their back.”

Saying, “they are for killing,” Florida’s Democratic U.S. Sen. Bill