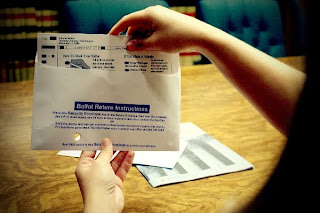 Pinellas County Supervisor of Elections Deborah Clark is right. Opponents of early voting, such as the St. Petersburg Times, are wrong. When it comes to voting-by-mail, the issue is as simple as that.

Two years worth of elections clearly show that voters prefer early voting and voting-by-mail, at least as voter turnout is concerned.

I’ve taken a look at the 2009 and 2010 municipal elections and the data clearly indicates that Pinellas voters have not only accepted the concept of voting-by-mail, but appear to prefer voting-by-mail.

Here is the turnout information with the St. Pete Beach mail ballot election separated from the elections with polling places.

Here is the turnout information with the St. Pete Beach all-mail election separated from the elections with polling places:

Early voting started Friday and will continue through Oct. 7 for a pair of special elections

Early voting started Friday and will continue through Oct. 7

The Oldsmar City Council ended a year-long search for its