There is something positive to be said about pumping out piece after piece of this crap, but it’s hard to be positive when the design is garish and the message so muddled.

Yes, I said garish. All sorts of colors and images and fonts, all swirled together with no apparent concern for the person reading it. It’s looks like a crayon box was leaked all over the paper. 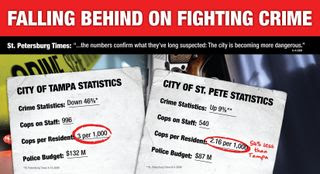 There’s police tape and a gun and some sort of silhouette of either an alien or the dude that broke into Rick Baker’s spot. And that’s just on one side.

There’s a Sierra Club logo and a “Please Recycle” message and an entire section dedicated to an unattributed quote from a “citizen.”

There are gerunds for headlines (“Falling Behind on Fighting Crime”) and entire paragraphs written with ellipses. There is a plea to get out the vote message that is too late for early voters and too early for likely voters. 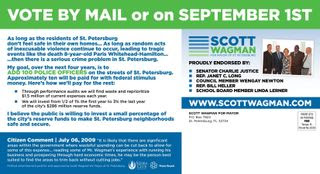 Exactly who is this mailpiece targeting, who is it from and who is it asking you to vote for? It just isn’t clear. Nor would it be clear to the indifferent voter who will be quickly depositing this lump of dung into the trash can. The same place you’ll be able to find Scott Wagman’s yard signs in about a month.