I don’t know which cookie-cutter design firm baked this lump of crap up, but Scott Wagman’s first direct mail-piece arrived today. His campaign just thinks it’s so cute that voters actually recognize that blue-green spectrum logo, but they don’t. This piece is just atrocious. 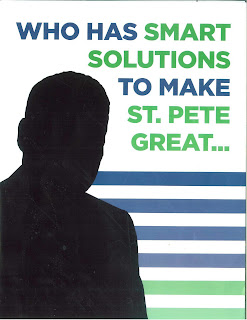 If a voter looks at this cover, especially an older, undecided voter, they will have absolutely no clue what this mail-piece is about. Silhouette? Why is this person hiding?

As for the blue-green spectrum, NO ONE KNOWS WHAT THAT REPRESENTS! Mitch and Co., think they have been everywhere and EVERYONE has seen Scott’s logo. Well, they haven’t. It takes hundreds of thousands of dollars to ingrain a logo into a political media market the size of St. Petersburg.

Scott is entirely unknown, according to at least two different polls. So if voters don’t recognize his name, why would they recognize his logo? Wagman’s campaign has no sign presence to speak of, no ads on television, so no undecided voter is going to have any clue what this logo is about.

As for the text, the use of an ellipse instead of question mark only works if there is a pay-off in the inside…which there isn’t. Wagman would have been better served with a more straightforward approach. 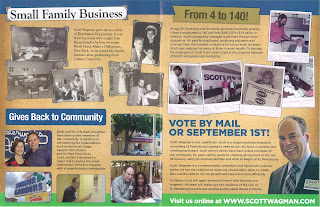 My problems with the meat-and-potatoes portion of this mail-piece are numerous. First of all, there is no tie-in with the cover. The cover is about smart ideas, while the inside is about Scott’s biography. This mail-piece doesn’t make sense.

Visually, this mail-piece is entirely unappealing. I see what the designer was trying to do, but there is no continuity to the design. Look at it as an entire piece, and you’ll see that it really is four separate portions. There is no flow. 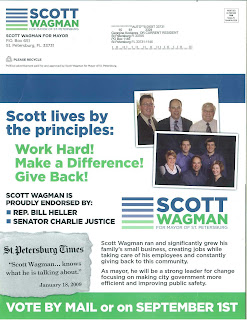 Don’t get me started on the back of this mail-piece. Saying that it was designed by committee is an understatement. This is “kitchen-sink” design, because everything is put into this section. I can just hear the consultants or the creative director cajoling the poor designer to make “a little bit more room” so they could get this sentence in or that picture.

Like I said, atrocious. If this was a nickel-and-dime campaign, I would grade it a C- but since Mitch Kates will probably make 2K of this roogoodoo, I give it a D-. Barely passing.