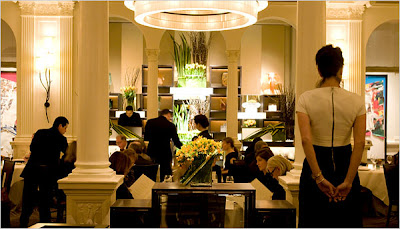 Champagne for breakfast? The Michelin guide for 2010 has awarded Daniel Boulud’s Restaurant Daniel a third star.

“I’ve been in this business for long enough to understand the meaning of this and I am very happy for my team,” Boulud said in a telephone interview. “To get three stars means we have worked hard, and New York isn’t an easy place. It’s relentlessly challenging but we’ve come a long way and I’m proud of it and very excited. It’s what we dreamed of every day.”

The losers are Alain Ducasse’s Adour, which drops to one star from two, as does Mario Batali’s Del Posto. Allen & Delancey loses its star, along with Cru, Fiamma and Jojo, plus Fleur de Sel, which closed. Eleven Madison Park wins its first star. A Voce regains its star. Babbo doesn’t.

“Daniel has been very consistent throughout the year,” Jean-Luc Naret, director of the guides, said in a telephone interview. “We’ve been more than eight times this year and eight times it was really exceptional.” Of Adour, Naret said: “It’s not about the name over the door, it’s about the food on the plate. I’m sure Alain Ducasse will manage to put the right team in the right place and I’m sure they will be able to gain the second star back next year.”

Michelin-approved gastronomic delights don’t come cheap. The three-course menu at Daniel is $105, with another $60 for matching wines. At Alto, it’s $79 for four courses such as seared scallops, grappa-soaked raisins, toasted marcona almonds. It’s $85 for three courses at Corton, which serves rabbit and diver scallop with artichoke, sweet potato, black garlic.

Gordon Ramsay holds onto his two stars for Gordon Ramsay at the London. Neil Ferguson, who originally headed the kitchen, won a star at Allen & Delancey last year. That Lower East Side eatery loses the accolade after Ferguson moved on to Soho House.

This year, Michelin inspectors entered comments on the Twitter Web site, including the comment “Shhhhh…New York City has a new three star chef,” a teaser that appeared on Oct. 2.

Michelin & Cie., which is based in Clermont Ferrand, France, is the world’s second-biggest tiremaker. It produced its first Red Guide at the turn of the 20th century to encourage motoring. The guides are expanding internationally under Naret.

Prudence Duchene will never forget the day she moved to Key West. It was Aug. 30

Prudence Duchene will never forget the day she moved to

Celebrity chef Gordon Ramsay cooked up a unique dish while