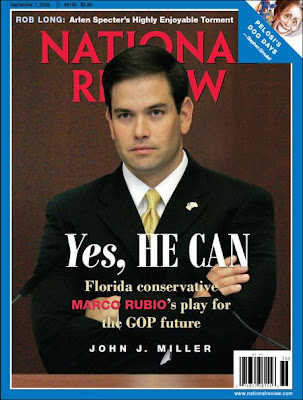 Marco Rubio is on the cover the new National Review – a coup that should help the Miami Republican raise some national money from grass roots conservatives. The writer is John J. Miller, who has written several pieces critical of Charlie Crist:

On paper, it looks like a mismatch between an unbeatable juggernaut and a doomed also-ran.

Yet Crist may be vulnerable: He warmly embraced President Obama’s stimulus spending and is one of the most liberal politicians in the Republican firmament. Rubio is among the brightest young stars on the right. Their contest could become the sleeper race of 2010.

The piece includes flattering quotes about Rubio from the likes of Jeb Bush (“He’s got all the tools. … He’s charismatic and has the right principles”) and former Bush adviser Mike Murphy (“Finding Latino stars in the Republican party is a big deal…I don’t want to pigeonhole him — I’d like him if he was Scandinavian — but it’s a plus.”)

The good news is that Rubio doesn’t have to match Crist dollar for dollar. But he does need to hit a certain mark — enough to lift his name into the consciousness of most Florida Republicans. It can probably be done for about $5 million, give or take. Primaries are famously fluid, with lots of last-minute deciders. Candidates such as Rubio can close hard and fast in the final two or three weeks, but only if they spend a long time preparing to make the most of their opportunity.

Rubio may want to think of his task as a football game: He’ll need to play from behind, hanging in there against a stronger opponent for a full four quarters and hoping to put himself in position for a game-winning kick as time runs out. Then the nightmare will belong to Charlie Crist.